I don’t think I’ve ever gotten everything done in a day that I set out to. You shouldn’t make yourself crazy attempting to necessarily get everything accomplished on your agenda. It’s okay to put off tasks for later.

Things come up. We underestimate the time we spend on tasks. Life will not stop while you send emails and go to meetings.

I currently use Wunderlist to manage all of my tasks, reminders, and small pieces of important information that I would like to recall later. (And if you would like some suggestions for which to-do platform you should use, I have made several suggestions here.)

In addition to Wunderlist and other tech tools, I also make use of a weekly calendar notepad in my study at home, mostly to keep track of assignments and appointments for the week. (Something I picked up working with the managing partner at my first law firm job several years ago.) I use this list in addition to Wunderlist, rather than as a complete list of everything for the week.

At the end of the week on Sunday, I usually go over the list as part of my weekly review.

I especially want to show you all my written to-do list from this past week, because it perfectly shows that you can still be effective even though you need to push or defer a lot of tasks to the future for various reasons.

My week was very productive.

Despite the fact that I lost several hours this week dealing with a broken laptop, and I had to make a day-trip to a neighboring state on Wednesday to respond to a family emergency, I managed to meet my deadlines at the office; read for classes; have time to lift weights, run three times, and enjoy several yoga sessions; turn in several law school assignments; and make time to perform research for some upcoming blog posts. I even attended a friend’s going away party before he joins the Navy, and watched some other friends perform their original dance piece at a showcase. 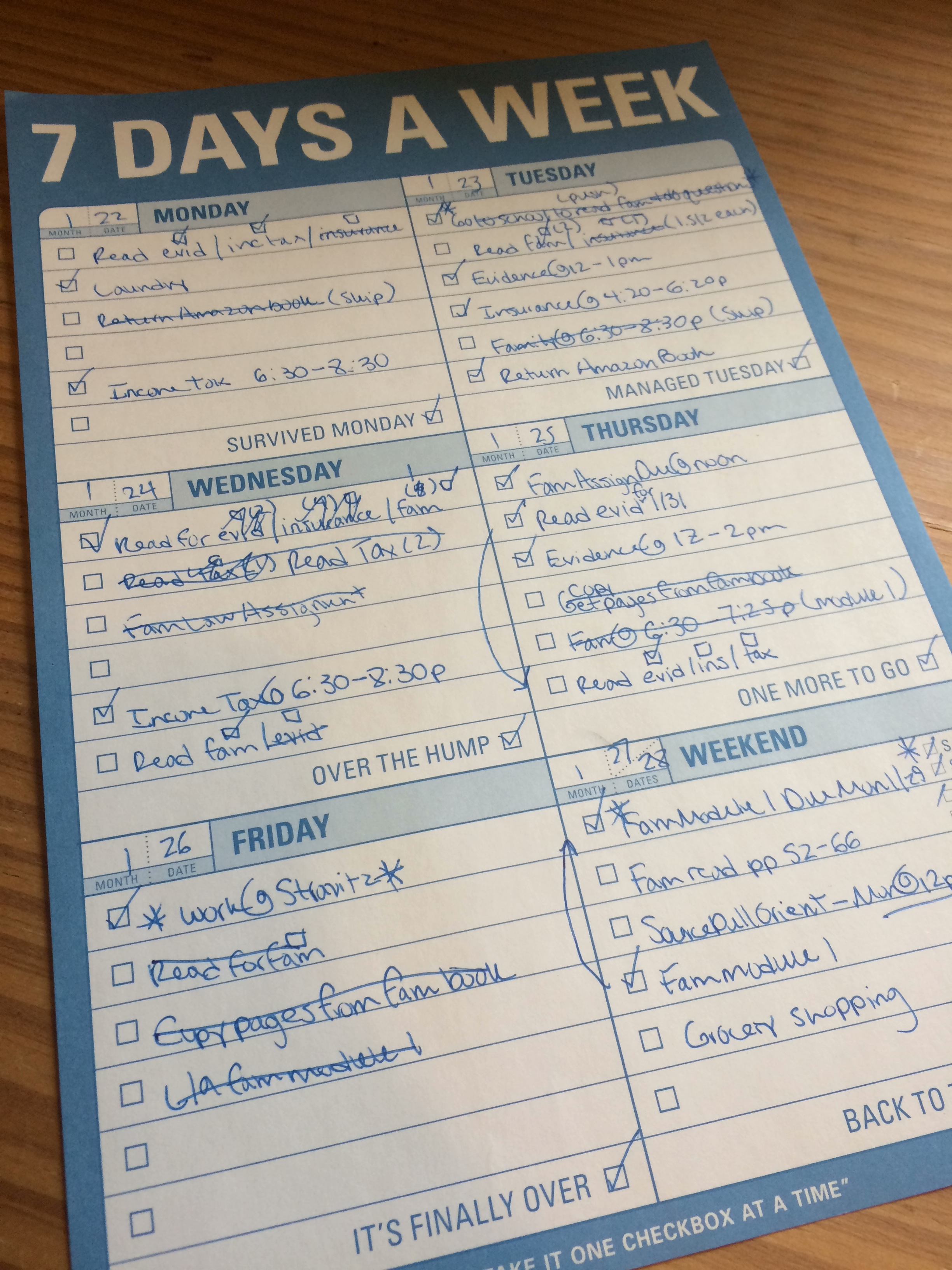 If you look at my paper to-do list, however, you might be misled into thinking it was unproductive because I barely got to half of the tasks I set out to accomplish.

I chose which tasks were the most important, and went about them in a way that produced the most results in less time. Tasks that were not urgent, I crossed out and wrote “skip” or “push” for later.

Many people do not like to defer tasks. I think this comes from the guilt of being “lazy” on some level. It’s probably the same reason many people insist on coming to work when they have the flu.

You shouldn’t ignore your conscience. If you have something important to do–do it. I can’t tell you what’s important to your values. For me, there was no way I was going to miss a family emergency just to get some additional reading done.

But you also need to stay realistic. It’s not worth your sanity to make sure you’ve “cop[ied] pages from fam book” (see my Friday) if it’s not in the cards for that day. So PUSH IT dammit!

Sometimes I have asks on my list that I need to push for several days in a row (if your computer is broken, you’ll be pushing “back up laptop” for a couple days, as an example).

The beauty is that sometimes these tasks take care of themselves. For instance, a task to “follow up with the mechanic” would be completed if the mechanic called you first. If you’re not in a rush to speak with the mechanic, let them call you after a couple days.

Okay, maybe after a couple days of pushing the task, make a call to check on your car.

4 thoughts on “Push it and don’t feel guilty”