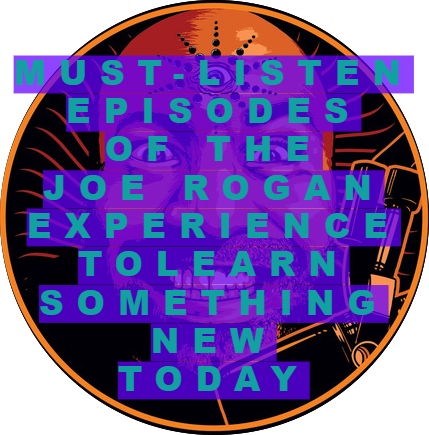 What is causing bee colony collapse disorder, and what can fungi do to help? What is one stretch to reduce anxiety and depression? What can most people do to take charge of their day and “hack” their brain to achieve peak performance?

If you’re anything like me, you like to listen to something that is both informative and entertaining while you are performing tasks that do not require much thinking to maximize your time and energy.

Whenever I refresh my podcast app in the mornings before I drive to the office, I’m on the lookout for episodes from which I can learn something new or get a good laugh.

I have been a big fan of the Joe Rogan Experience podcast over the past several years to satisfy this desire. I especially like to listen to while I am driving in the car or working on a project that does not require a lot of intense thinking (e.g., folding laundry and driving). This is because it’s chock-full of interesting ideas and methods for self-improvement.

For those who do not listen to JRE, you might recognize Joe Rogan as the host of the UFC or Fear Factor back in the day. That is not all Joe Rogan does, however. He’s also a stand-up comedian and host of one of the most popular podcasts of all time.

The Joe Rogan Experience is consistently ranked as the #4 podcast on iTunes, and Joe Rogan himself in 2016 claimed to have over 30 million monthly downloads (although recently has suggested his podcast is downloaded over 90 million times per month). This is not even including viewers of his live stream, links to which he regularly posts to twitter.

Although his humor is often coarse and not for family listening, and I certainly do not agree with everything (or even most of what) he says, he always manages to have interesting guests armed with cutting-edge research findings or killer stories.

Joe Rogan is curious about everything. No wonder he has even had his own television show, “Joe Rogan Questions Everything.” From health and medicine to nootropics, to peak alpha flow states, to hunting and stand-up comedy, Joe Rogan will make a deep dive and ask the hard questions.

The fantastic guests are probably the other reason why the JRE podcast is consistently in the top 5 podcasts in the iTunes store. Joe might engage in a several-hour-long discussion with a person advocating for seasteading in one episode, and the next will host a comedian or expert in some esoteric topic you had no idea was so interesting.

If you are instead trying to laugh or listen to some comedy, I have also compiled a list of the funniest episodes of JRE here.

Because the JRE podcast and the resulting ideas to which I’ve been exposed have made such a profound impact on my life, I have here compiled a list of some of the most informative and interesting episodes of JRE to date. Enjoy!

Want to learn about what scientists are doing to prevent bee colony collapse disorder? How about new research on how fungi can assist with neurogenesis in humans and prevent cognitive decline?

Paul Stamets is a mycologist who will continue to keep you interested for the entire episode. Without giving away too much, among a lot of other interesting information, Stamets has discusses a method he developed by a chance observation in his backyard that helps prevent bee colony collapse disorder with fungi.

A month ago I suggested this episode to a good friend of mine and he recently told me he was already due for a re-listen.

Kelly Brogan, M.D. is a holistic women’s health psychiatrist and author of the NY Times Bestselling book, A Mind of Your Own. Her practice focuses on healthy diet and lifestyle changes as a means to be healthy rather than resorting pharmaceutical or other conventional medicine.

More Lawptimal:  Bloom Your Coffee to the Next Level

One part of this episode that intrigued me was her discussion of birth control pill alternatives, such as the use of the Daysy ovulation calculator. I highly suggest this episode for everyone because it has information that applies to all, and is very interesting.

If you are trying to learn about how to get more done in less time and make your brain operate at its highest level, Steven Kotler has some methods to start you on your way.

Steven Kotler is the co-founder of the Flow Genome Project and does the bulk of his research on peak alpha flow states.  He also used to be the Director of Research but stepped down in early 2019.

In this episode, he discusses some methods by which people can “hack” their brain chemistry and simulate the same neural cocktail of a peak alpha flow state.  Steven Kotler here introduces listeners “flow states,” but also provides a lot of information and moves at a quick enough pace so as to not bore those with a better understanding of flow states.

Also, whether you listen to this episode or not, I highly suggest you go to the Flow Genome Project website and take the quiz to find out your flow profile. (I got “Hard Charger.”)

Duncan Trussell is a regular on the JRE podcast, and whenever he is a guest, the episodes tend to be some of the most popular with the fans.

I love when Duncan Trussell comes on as a guest on JRE, but this episode especially stands out to me because of the long discussion Joe and Duncan have about virtual reality. Duncan owns an HTC Vive, so the discussion stays on VR and the implications/future of VR for a majority of the episode.

Duncan tends to have very gestalt ideas about the world and tends to be ~earthier~ than other guests, so episodes in which he appears tend to be both philosophical as well as scientific. I think you could load up any episode with Duncan Trussell and learn something new. Duncan Trussell also appears in episodes 1051, 863, 764, 666, 630, 602, 577.

The most motivating and inspiring of the podcasts I have listened to so far over my hundreds (thousands?) of hours of listening to the Joe Rogan Experience.

Ex-Navy SEAL David Goggins can do hundreds of pull-ups in a row, is an ultra-marathon runner, and multiple world record-holder. He has run over 200 miles in one bout as just one example. He used to weigh several hundred pounds and had to overcome sickle cell trait to become who he is today. The story is profound.

I was introduced to stretching the psoas muscle for stress-reduction in this episode, which has made a profound effect on my life and my yoga practice, in general.

The fourth most-viewed episode of all-time and probably the most controversial. Alex Jones was the most fitting guest for episode #911.

Alex Jones is SUPER controversial. He hosts The Alex Jones Show across the United States and his website, Infowars.com is his conspiracy theory site. He’s promoted Sandy Hook Elementary School shooting conspiracies, has accused the U.S. government of involvement in the Oklahoma City bombing, 9/11 Attacks. He has been described by New York Magazine as “America’s leading conspiracy theorist.”

Listen. I did not agree with almost anything that came out of Alex Jones’ or Eddie Bravo’s mouths in this episode, but I did find their information interesting. Joe Rogan does not give Jones complete run of the show to disseminate his views–Rogan remained immensely critical for almost the entire episode.  I think everyone could find something interesting in episode #911, even if you think Jones is crazy.

More Lawptimal: Reduce friction and ditch the vision board

Make sure you also listen to episode #1255 episode as well.  There is just as much, if not more, to unpack in the second episode.  The developments with Alex Jones being de-platformed from YouTube and his feud with JRE and other media have clearly had an effect on Alex Jones since his last JRE appearance.  I think this all becomes apparent watching Jones interact with Joe and Eddie Bravo throughout the interview.

Also discussed are animal-human hybrids, aliens, what is God . . . the list goes on, and on.  Alex Jones talks in a stream-of-consciousness and he has a tendency to bring up many different topics at once.  This episode will go down as one of the most memorable JRE podcasts of all time.  I will be doing more writing on this episode in the future, but for now, I suggest each reader check these episodes out.

I have to applaud Joe Rogan for having Alex Jones on after Jones was de-platformed.  It takes courage to have someone like Alex Jones on your show when others refuse to even mention his name.

“The cure for ignorance is education.”  – Daryl Davis

Daryl Davis is an R&B and blues musician, activist, author, actor and bandleader. He is the author of “Klan-destine Relationships: A Black Man’s Odyssey in the Ku Klux Klan,” and is also a resident of my home state of Maryland, which made this episode more close to home and particularly interesting.

Davis has worked to improve race relations by seeking out, engaging in dialogue with, and befriending members of the KKK to help them leave their hateful pasts behind.  Of the many stories in this episode, one of the most interesting is the discussion of Davis’ tense interview of a high-ranking member of the KKK.

You can skip to any part of this episode and learn something new.

A friend of mine showed me this episode years ago and it is the reason I switched to french pressing my coffee.  One cool story includes a coffee roaster in Japan who wakes in the early morning hours and will not open his coffee shop until he gets the brew just right.  Peter Giuliano is a coffee expert and is Director of the Specialty Coffee Symposium, but he won’t lose casual sippers, and those who are more serious about coffee will also appreciate the depth of this discussion.

More Lawptimal: Bloom your coffee to the next level

In JRE #1231, Joe and Matt Braunger at the beginning of the episode also discuss coffee as well as the interview Joe had with Peter Giuliano.

Graham Hancock is an English author and journalist, well known for books such as “Fingerprints Of The Gods” and his latest book “Magicians of the Gods”. Randall Carlson is a master builder and architectural designer, teacher, geometrician, geomythologist, geological explorer and renegade scholar. Michael Shermer is a science writer, historian of science, founder of The Skeptics Society, and Editor in Chief of its magazine Skeptic.

More Lawptimal:  Using Bitcoin and cryptocurrencies in an asset protection

In this episode, the guests present evidence suggesting the occurrence of a large flood around 10,000 years ago in North America, and they discuss the consequences of that flood on our modern understanding of history.  I like #961 because it includes Michael Shermer in addition to Randall Carlson and Graham Hancock.  Geology nerds will love this one, if that’s a thing.

be sure to check out our list of the Funniest Episodes of the Joe Rogan Experience!

Ryan Ullman is an associate attorney at Spence | Brierley in Baltimore, Maryland, a boutique firm that assists its clients in all manner of civil litigation. He is particularly interested in technology, productivity, peak flow states, music, and the outdoors.
Twitter